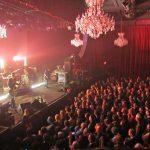 On a chilly Monday morning, the third cohort of Concert Career Pathways interns and The UC Theatre staff took a trip to San Francisco’s most famous venue: The Fillmore. Some of the best shows I’ve attended have been at The Fillmore, so I was excited to learn more about a place I have admired for so long.

Once everyone arrived, Amie Bailey (The Fillmore’s General Manager) had everyone introduce themselves, and told us briefly about how she worked her way up to become the venue’s GM. Then she led us upstairs to tour the poster rooms. Amie told us the history of how The Fillmore gained the reputation it has today as a venue that helped launch the careers of the Grateful Dead, Jefferson Airplane, Santana, and more.

The venue started out as a dance hall in 1912 and didn’t become The Fillmore Auditorium until 1954 when Charles Sullivan started booking bands and renamed the venue. Over the years, the venue has been a dance hall, a roller rink, a mosque, and has been a place where the punk, funk, and bohemian scenes have thrived. In 1965, Sullivan let Bill Graham use his dance hall permit to book a benefit for the San Francisco Mime Troupe, and after that Graham continued to book shows there. With the help of Bill Graham, The Fillmore transformed into the iconic music venue that it is today.

Amie told us a lot of fun facts about the venue. For example, The Fillmore has a bucket of apples in the lobby during every show. Bill would make snacks available in the lobby during the long shows because people would eventually get hungry; but the apples point to something more significant in history. During the Holocaust, Bill was imprisoned in Nazi concentration camps. While there, Bill and other kids would hop a fence into the farm bordering their camp to steal apples to eat. What is an endearing treat during shows at The Fillmore today pays respects to a very dark time in history.

Throughout the entire tour my jaw was on the floor. The Fillmore was my favorite venue when I was a teenager and I used to wait in line for hours so I could be at the front of the audience. I couldn’t believe that I used to be a fan waiting outside of the venue for a concert a few years ago and now I was getting a private tour. I also learned that our CEO, David Mayeri, played a role in designing the look of the room—which explains The UC Theatre’s chandeliers paying homage to The Fillmore.

If it wasn’t for the CCP program, I don’t think I’d ever have a chance to see this side of The Fillmore. Touring The Fillmore was an unforgettable experience and I can’t wait to go back for another show.